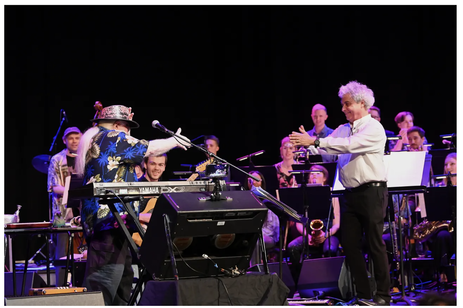 Jovino with Hermeto Pascoal and the National Youth Jazz Orchestra at the Barbican in London on May 5, 2022. Photo by Tom Howard. Read a review of the concert at the Norwich/Norfolk Festival here

Click here to read an article by Robin Loyd of KNKX FM on Jovino's online classes and his recent story as an online lecturer
Here's a link to a recent interview with Jovino for the podcast The Brazilian Beat... enjoy!
Review of a duo concert with Huw Warren in Cardiff, Wales:
https://seenandheard-international.com/2019/06/wales-meets-brazil-and-joyous-global-music-is-the-result


Happy to share the news that my solo piano CD "Piano Masters, Vol 4" has been chosen as one of the 5 favorite recordings of 2013 by the French site CultureJazz:

Santos Neto alternates between his home in Seattle and his Rio de Janeiro birthplace. In this solo album, he concentrates on his own compositions and pieces by other Brazilians but also plays standards of Jerome Kern, Richard Rodgers, Cole Porter and John Lennon. A protégé of the monumentally influential Hermeto Pascoal, Santos Neto excels in the music of his native country and in jazz, showing no evidence in his playing that he finds conceptual differences between them. He follows a reflective “My Funny Valentine” with his “Sempre” as a brief transition to Ary Barroso’s ”Na Batucada da Vida,” creating a luscious medley. “Hoping For the Day,” a ballad supported by rich harmonic transitions, seems ready for a gifted writer of lyrics. Antonio Carlos Jobim’s “One Note Samba” glides and swings on bossa nova rhythms that recall the sense of discovery the Brazilian music excited when it first traveled north. Santos Neto invests Pascoal’s famous baião “Bebê” with the drama that makes it one of the composer’s most beloved pieces. The recording captures the Fazioli concert grand piano with rich fidelity.

Current/ Corrente
The concept of flow is a far reaching and powerful idea when related to musical performance. At its essence, it taps into the thought of moving from one place to another, on a physical, developmental, and artistic level. All of these types of flow occur within any group of musicians that stay together over a long period of time. Each musician flows into physical changes, gaining new technical skills on their
instrument that push their music. Exposure to new ideas and indulging in experimentation inspire new ideas and internal thoughts about artistic approach, flowing into developmental changes. The flow of time forces us into evolution, guaranteeing that we become a different artist than we were at our starting point. One individual experiencing the strength of these changes can make a deep artistic impression; when a group of musicians follow these types of flow together, the impact is multiplied tremendously. After more than fifteen years, Jovino Santos Neto and his Quinteto show the results of their flow as a group on Current, a solid collection of Brazilian Jazz. Chip Boaz

Clearly a superb and powerful outing from a master pianist and his longtime band mates, with Current, Santos Neto continues
his exposition of the Brazilian genre, delivering yet another dynamic statement and affirming
his status as one of the top Brazilian artists in the business. Edward Blanco  Read full review ...

From the first notes of the lilting, swaggering Afro-Caribbean melody of “Corrente” it is clear that Jovino Santos Neto is on his surreptitious
way to making his Quinteto album, Corrente one of his most memorable to date.
Jovino Santos Neto, more than any Brazilian musician, with the possible exceptions of Egberto Gismonti, Nana Vasconcelos, Sergio
Santos—vastly different artists from each other as they are from Santos Neto—yet who revel in the deep roots of African, native as
much as they do on European sources. Somehow the final “word” is that the soul is now in a place from where it will eventually emerge joyfully. But that is a story that the next album from Jovino Santos Neto must tell. Raul da Gama  Read full review ...
How does three-time Latin Grammy nominee Jovino Santos Neto follow up his 2010 superlative release Veja o Som - See the Sound? Here is a surefire recipe. Write all new original compositions and make sure they cover the wide and varied spectrum of Brazilian music, including choro, baião, marcha, samba and xote. Of course, if you are a competent and ccomplished musician such as Jovino, you will want more than that. You will infuse a modern twist to those musical genres and make sure your music blends in a perfect share of stimulating harmonies and infectious improvisations. Finally, since beauty is to be shared, you invite friends to form a quintet and perform these new melodies. Egidio Leitão  Read full review ...

Veja o Som / See the Sound
Jovino Santos Neto’s piano is omnipresent, matching up magnificently with the best of the best in a variety of instrumental and vocal combinations. Synaesthesia is not as easy to achieve in any of the arts, but when it happens and the senses intersect it’s often mind blowing and heart enhancing. So it is with this project of twenty songs performed by as many musicians-- and all of it superb. One could go on with countless superlatives about the quality, passion, dedication and pursuit inherent in this year-long quest for the best; however, more words of praise would fail. Just listen. You’ll see the meaning … see the sound!  “Obrigado!” indeed! By Bob GishReview of "Veja o Som' from Jazz Inside Magazine, February 2011

Roda Carioca / Rio Circle
"Beautiful Brazilian jazz from pianist Jovino Santos Neto -- playing here in a wonderfully fluid mode that sparkles with lots of warm acoustic touches! Neto's playing mostly piano for the session, but also brings in a bit of melodica, flute, and accordion -- further expanding the colors in the tunes, as do some of the album's great guest performers -- who include Joyce, Hermeto Pascoal, Hamilton De Holanda, and Marcos Amorim! There's a sense of grace here that's totally great -- one that really recalls an older sound of Brazilian jazz back at the end of the 70s, and which is recorded here without the overly glossy production style that sometimes hurts other albums of this nature." Roda Carioca review from www.dustygroove.com

Roda Carioca"...the exciting set plays like a vibrant musical encyclopedia of the musical spirit of his homeland. The joy keeps growing through "Coco na Roda"-- whose feisty drumbeat and whimsical mix of instruments create a Brazilian version of Mardi Gras music -- and tracks like the lively samba Gente Boa." review by Jonathan Widran, All Music Guide.

On the new live disc, Neto presents himself as a solid jazz musician whose passion and verve reflect time spent with Pascoal. Neto oftenvisits his native roots on this fine album of all original material Gambit Weekly, New Orleans, Dec.12, 2000

Jovino Santos Neto (piano) and Hans Teuber (saxophone) are two of the few jazz musicians in town who truly bridge the gap between local and national talent...Neto continues to enrich the local scene in many ways: whether it's performing at local joints like Serafina or adding that extra dash of greatness on local recordings like Ben Thomas' The Madman's Difference." Nathan Thornburgh, The Stranger, Sept.23, 1999

"...Jovino Santos Neto's Once Again for the First Time was a bold and sweeping piece with aggressive fistfuls of Ives -cum-Messiaen chords at the climaxes" Gavin Borchert, Seattle Weekly, Oct.7, 1999


" ...a warm, high-energy player, as fun to watch as he is to hear. Mark Fefer, Eastside Weekly

"... all original compositions, which were highly rhythmic and beautifully arranged. Sandra Burlingame, 5/4 Magazine